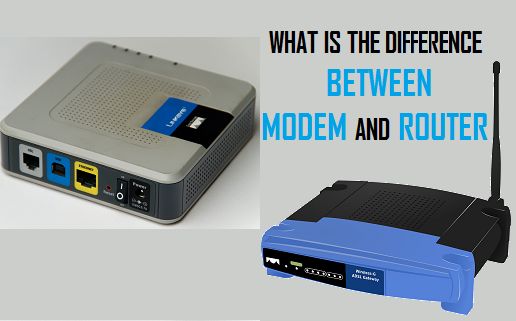 The terms ‘modem and router might not be strange to you if you use the Internet regularly. The only problem is you might not have taken time to understand what these two items are because in most cases people think they are the same.

In simple terms, a router creates a network between those computers you have at home. On the other hand, a modem connects that particular network and thus the computer is connected to the Internet. For example, connecting to a WI-FI simply means that you’ve connected to the router. This, in turn, forwards the traffic that is between your computer and the Internet. In many cases, many Internet providers bring a combination of both the router and the modem and will perform the same functions on a single device. It’s therefore important to know the difference between the two so as to get a better understanding of what these two devices are. So what is the difference between modem and router?

A) What a Router Does

A router’s function is to connect several networks as well as routing network traffics that are between them. It’s as easy as that For example, home network router usually has only one connection to the private network and to the Internet. Additionally, these routers usually have an in-built switch which allows you to connect to general devices. Furthermore, there are others which have wireless radios which makes it possible to connect to Wi-Fi devices.
This is how you know routers well especially those on your home network. It sits between the local network and the Internet connection. It’s the one that allows you to connect several devices to the Internet using one physical Internet connection which allows hose devices to communicate over the available local network. Similarly, the routers protect your devices from direct exposure to the Internet. The Internet generally thinks that all the traffic that is coming from your home seems like it’s from one device. The router records the traffic going to devices on your network.

Well, that’s not all. Note that it’s not possible to connect to the Internet with just a router alone. You need to plug the router into a device which can transmit the digital traffic over the Internet connection type that you are using. This device is what is called a modem.

B) What a modem does.

The modem acts as the bridge or connection between the Internet and your local network. A modem is simply a short form of Modulator-demodulator. This is because they were used in the modulation of telephone signals so as to encode and transmit digital information over them and then connect them on the other end. Though there are other modems broadband such as cable and satellite which don’t work the same way. The term ”modem” is used because most people are familiar with it.

The fact that the modem attaches to your network depends fully on the type of connection that you are using. What a modem does is that it plugs in whatever gadget you are using may it be cable, satellite, phone or even fiber. It then allows you to have a Standard Ethernet output cable which you can plug into any type of router and then get your Internet connection.